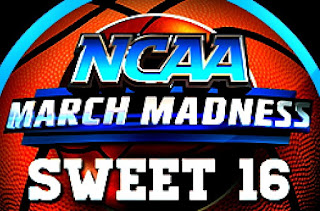 Here I sit in a quiet household, I'm up early watching Key and Peele on Comedy Central and checking on April on the Giraffe Cam on Youtube as I surf the net and collect my thoughts for the day.

Well the WVU Men's Basketball team beat the Notre Dame Fighting Irish 83-71 yesterday to be the first team to advance to the Sweet 16. That round will begin on Thursday and we will take on #1 seed and the nations 32 seed Gonzaga. Gonzaga has gotten the better of us the last couple of times we have played, so we have a little added inspiration other than advancing in the NCAA Tournament, if we beat them this will be thr third team that has been ranked #1 this year that we will have beaten. We're going to have our hands full, but it is a task that can be accomplished.

The WVU Women will be trying to make their mark and advance to the Sweet 16 themselves as they take on #3 seed and the #4 team in the country when they take on the University of Maryland this afternoon at 2:30. The Mountaineers have never beaten Maryland, but they have only played twice and haven't played each other since the early 1980's.

For Michelle and I, it'll be a day of doing our grocery shopping and the things that we usually do on every Sunday to prepare for another week of work ahead.

Have yourselves a great day today.
Posted by George Hall at 3:00 AM