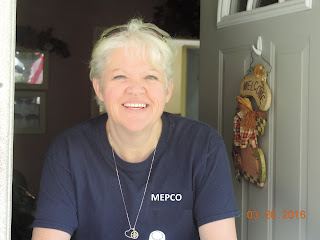 A little over a month ago, early February, Michelle's employment ended at where she used to work at. It was not her choice, but she was underpaid, overworked and very much under appreciated. She was a dedicated employee who went above and beyond despite it being the root of some of her medical problems in the past couple of years. They burned the bridge and that bridge is now officially gone and she has moved on to a better place.

It all started a couple weeks after she was unemployed when United Talent contacted her and said they had a position for her possibly. She went in and did their testing (she typed 90 WMP) and was offered a temporary job with MEPCO through United Talent for more money than she was making per hour at her previous employer.

Prior to starting there she had two other interviews. One with UBC express scripts who did make Michelle an offer, but it was under her market value and she graciously declined the offer. She had also had another interview with Mylan Pharmaceuticals who made her a VERY lucrative offer. It was an amazing offer and she had accepted it and even went through the drug screen and was to officially begin next Monday. When she went to MEPCO, they told her they wanted to make an offer as well, that includes buying out her United Talent Contract and they actually exceeded Mylan's offer in Salary, 401K Match, Bonuses, and the health insurance plan. Both offers were pretty similar, but Mylan offered a little more PTO time and MEPCO offered her a salaried position.

Michelle had already accepted the Mylan offer when the MEPCO offer came in. She pondered it for a couple of hours and I asked her what does her gut tell her.

Well as of today, she is OFFICIALLY a salaried employee of MEPCO. She has really impressed them and they went above and beyond to retain her, they more than understood her value and more than  appreciated her.

I am very proud of my wife, she received three offers of employment and two of them were phenomenal offers. We have kept this quiet until the right time, it is now the right time.

Congratulations Michelle.
Posted by George Hall at 3:00 AM