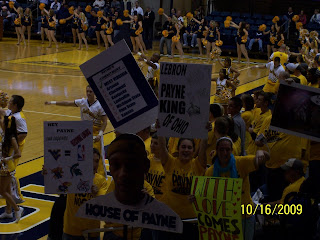 Last night was the start of the 2009-10 Mountaineer basketball season. Mountaineer madness as they call it was in full effect for the evening. Fans jammed into the Coliseum to watch this edition of the Mountaineers and try to help Huggins in landing one of the premier players in the country, Adreian Payne. The Mountaineer maniacs were out in full force to help coach Huggin's land this prospect, I hope we sign him, but that is all up to him to decide.

The evening started off with the introduction of both the entire Women's and Men's teams and giving them all a chance to walk down the carpet. Both coaches were given a few brief moments to say a few words and then it was time to move on.

Next up was the alumni 3 free throw shooting competition. Former players were split into two teams and the first team to make seven free throws won, the kicker was that they had to select one fan out of the stands and they had to make the final free throw. Kevin's Pittsnogle's team selected a fine young lady, a forestry major named Wanda. What a beauty she was. I wonder if she was related to 1968 team member and current color man Jay Jacobs, they looked a lot a like =) 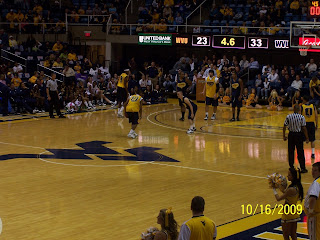 The culminated with two ten minute scrimmages by both the Women's and Men's teams. The men are preseason ranked #5 and the Women are going to also be awesome. I recommend checking both teams out of you get a chance this season.