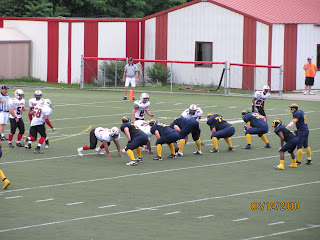 It's going to be a day at the ballpark for us, as the rained out games are made up today. Thankfully for us we only have on game on the agenda for today that has to be made up. I know Michael really wants to beat these guys because they have came into the bar talking a lot of trash.

Last night Michelle and I went to watch the WV Gladiators play for the first time in a couple of seasons. They went up against the WV Lightning out of Charleston and a team the Gladiators had lost twice to the past season. You could tell the Gladiators were not the same team we watched a couple of years ago. Many of the familiar names have moved on and a new bunch has filled their spots. When we left last night the Gladiators were losing 7-20 and that was near the end of the 4th quarter.