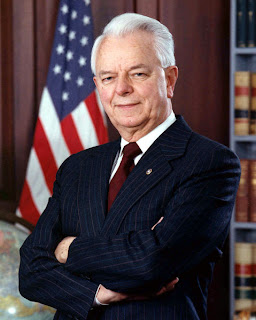 Whether you loved him or hated him, Senator Robert C Byrd is arguably the single most influential politician in the history of the State of West Virginia and one of our nations most storied Senators.

I heard the news yesterday morning when I woke up, Senator Robert C Byrd had passed away at the young age of 92. A day when the entire state of West Virginia lost it's biggest voice we have ever had in Washington.

He was called the King of Pork, earning the name for all the federal Money he funneled into my beloved state from his high ranking position in Washington. I'm not sure you can drive anywhere in the state without seeing his name or something he has placed his stamp on.

Senator Byrd was a man I had a great deal of respect for, and he will missed. Thank You for your service Senator Byrd.
Posted by George Hall at 4:00 AM