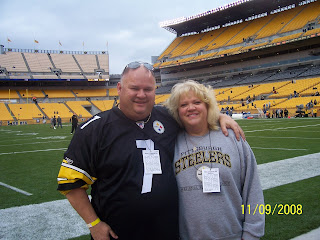 yesterday was our game that we got to go to when we won the 2008 KDKA McDonald's Pittsburgh Steelers Trivia Challenge earlier this summer.

The day started with a nice trip to Pittsburgh on a day Chris was on an adrenaline rush. He runs the entertainment scoreboards at both the Coliseum an Mylan Puskar Stadium. They also admitted his mom to the hospital that night also. Needless to say that we left at 10:00 AM and Chris had only had a couple hours of sleep.

We took a ride on the Duquesne Incline for Michelle's first ride on an incline and my first on that one. I had been on the one by Station Square previously.

Next it was on to Station Square for a little pre-game lunch and a chance to do a little bit of shopping. We went to Bar Louie for lunch, wow what a view and what a big bar.

After lunch, it was on to the Gateway Clipper and it took us across the river to arrive right in front of Heinze Field. It was the first time I had ever been on the water in front of Point State Park, so the ride was very enjoyable for me, despite the cold weather and us sitting on the top observation deck on the trip over.

We got to the game and were allowed to be down on the field for almost a couple of hours. Both me and Michelle had the camera's going hot and heavy and I uploaded everything to its own album located HERE.

We watched the game from one of the terrace's, and let me just say how freaking cold it was up there. I spilled a hot chocolate and the thing froze over before it hit the ground. It was briefly snowing and the weather report said for low 40's. That Geographer lied..LOL