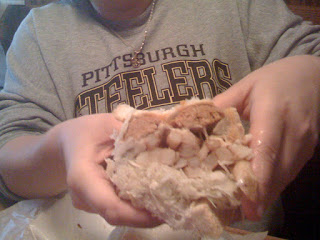 We did manage to stop and look around Value City Furniture
before we made it to Century III. We will be in the market in the near future to start our life together. We have stopped a few times looking at furniture, but I think we have now found a great store with a good product and the best prices.

Good news, Steve and Barry's may have went bankrupt and closing over 100 of their stores including the one here in Morgantown, however the one in Century III Mall is NOT one of them and will not close.

Outside of Century III we stopped an an outdoors store called Gander Mountain, a store that targeted the outdoors men and hunters and fishermen.

Yesterday evening we headed back and you know what we saw on Route 51? Primanti Bros. This was my fifth Primanti Bros I have been to and next month I will make the one at Heinz Field my sixth.
Posted by George Hall at 8:26 AM