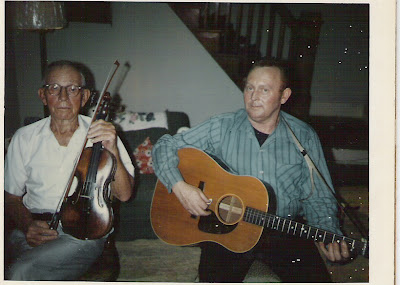 It's once again that time of the week when I take a little time out and look through all my old pictures to write a blog about.

This week's picture is a picture of my grandfather and his Nephew Red. Red used to perform yearly at the Forest Festival in Elkins. Both were very talented musicians and I remember the day this picture was taken.

My Grandfather had an old recording machine, one that you put a blank record in and it would record the sound straight to the record. It was a one time thing, if you messed up you didn't get a second chance. If it was wrong, it was wrong you might as well throw the record away.

How do I know this? They were recording that day and I was behind them making a silent but audible grunting noise so I could be on the record. This was like in 1972, so to have your voice recorded was a neat thing, unlike today with the electronic devices that everyone has grown so accustomed to.

Well anyways, they made a recording and I put in my unnoticed grunt, and it came through on the record. Neither musician expected to hear my unpleasant ugh, especially when they are trying to create a work of art.

They re-recorded it and I managed to pull it off a second time and a third time. After three attempts and they could not figure out what it was, they stayed with the third track and kept it.

I was a lil stinker.