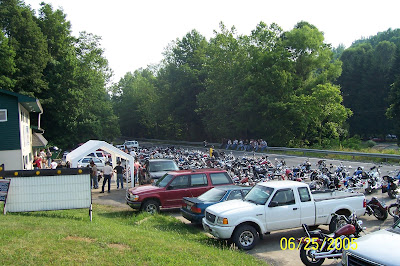 Once a week I take a stroll through all the thousands if not tens of thousands of pictures that I have managed to acquire overt he years and pick one and tell a little story about it.

This weeks picture comes from about six years ago, when Nick and Terri owned the Country Inn on Rt 73. This weeks picture was from a poker run. They were the last stop of the run, meaning that they had to provide a meal and it was the place where everyone congregated at the end of the run.

I remember this being a very busy day at the Country Inn until one drunken idiot pulled out of the parking lot doing a wheelie with his girlfriend on the back of the bike. She fell off and cracked her head on the pavement of Rt 73, meaning the police came and the majority of the people and bikes you see in this picture (as well as any money Nick and Terri would have made with such a large crowd) were gone.

I think they did additional poker runs, but they were never the final stop where all the money is made again.

They did have one heck of a crowd for a while.
Posted by George Hall at 4:00 AM