A Party for Moke 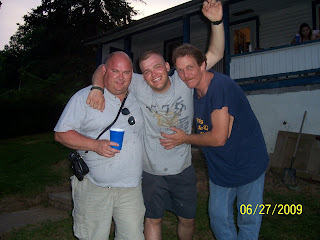 Pam and George had a deployment party yesterday for Moke, he will be leaving Monday Morning to go back to Wisconsin, then to New York, then to Germany (beer), then off to Kuwait and finally to his destination in Iraq.

It was a day of festivities yesterday, the food was a plenty as were family and friends. A Keg of beer and strawberry daiquiris plenty of liquor and a beer pong table was put to good use and there was going to be a big bonfire, but that was after Michelle and I had already left.

Michelle needed a little bit of solarcaine applied last night as she looked like a fresh lobster from the sun beating down on her the first part of the afternoon.


I took numerous picture yesterday and they can all be found HERE as we made quite a few Kodak moments.
Posted by George Hall at 6:12 AM