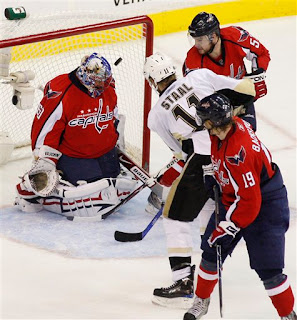 I'm not a big Hockey Fan, but when I do watch it involves the Pittsburgh Penguins and the playoffs. Last night was supposed the be the climax game of a classic series. A game seven to win this memorable and hard fought series between the Pittsburgh Penguins and the Washington Capitals. This was supposed to be the rubber match and the winner was to advance to the Eastern Conference Finals.

The game didn't meet my expectations, but the Penguins won pretty handily 6-2.

The Penguins now advance to the Eastern Conference Finals, if they can manage a win in this best of seven series they will be playing for the Stanley Cup for the second year in a row. Maybe this is the year they win it all, the Steelers did.
Posted by George Hall at 4:00 AM