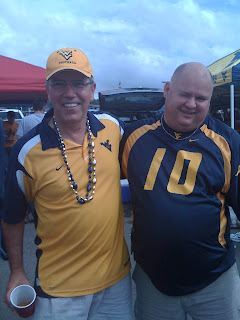 Michelle and I had a great time at the game yesterday, I did have the pleasure of running into an old online friend that I have never met in person before, Frank Souk aka Mustang 64 from the Blue and Gold News. Ironically it is the largest WVU sports fan site with the largest number of readership. The site is very busy and the readers announce awards to certain posters based on poster votes, the most distinguished award is to be a member of the Hall of Fame. This honor was bestowed to me earlier this year when I became the sixth member (out of roughly 30,000 posters) to be inducted into the Blue and Gold News Hall of Fame. Frank was the man who presented me. This was the first time we had ever met. 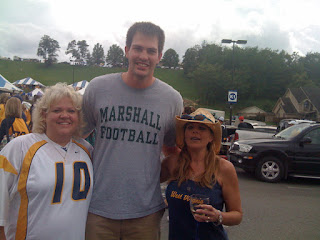 Michelle and I were invited to a tailgate with a lot of her coworkers at BFS in the Blue Lot. Great group of people and I felt more than welcomed and enjoyed myself at the tailgate. They are in the Blue Lot close to the gate, so they were pulling people in walking to the game to invite them to the tailgate.

One of which was Mark Patton (the tall guy in the middle), who was the leading scorer and leading rebounder on the Marshall team that beat a highly ranked John Beilein led team. He also had a role in the movie
"We Are Marshall" . I forget the name of his character in the movie, but he was the basketball player who joined the team in the movie.

Michelle and Hayley, her bosses daughter wanted to get a picture of them and mark standing together, I of course had the iPhone in hand and was ready to oblige their request.

On to the game, we had GREAT seats on the 50 Yard Line, 11 rows back on the Press Box side. They were courtesy of Marshall, her boss and they were very much appreciated. There was a nice little surprise to see Owen Schmidt on the sidelines, I guess the Seattle Seahawks are off this week. The game, well we finally got back on track to our winning ways with a 27-3 win against the Thundering Herd.

What a great day.
Posted by George Hall at 9:09 AM